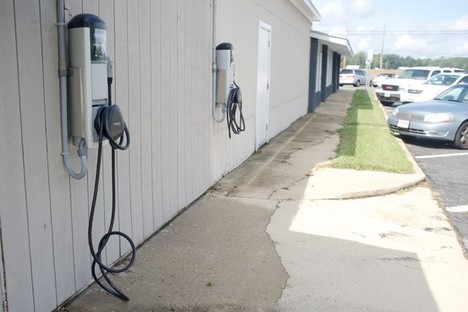 (p. B1) When McDonald’s franchisee Tom Wolf built his latest restaurant in Huntington, W. Va., late last year, he installed two chargers for all-electric cars so customers could juice their batteries while eating. So far, the charging station has been used a few times.
. . .
Across the U.S., such equipment is proliferating even though it is unclear whether plug-in cars will prove popular.
. . .
Fewer than 15,000 all-electric cars are on U.S. roads, says Plug In America, a group promoting the technology.
. . .
(p. B11) Charging equipment is popping up largely because of subsidies. As part of a $5 billion federal program to subsidize development of electric vehicles and battery technology, the U.S. Energy Department over the past two years provided about $130 million for two pilot projects that help pay for chargers at homes, offices and public locations.
. . .
Opinions vary on demand. J.D. Power & Associates expects all-electric vehicles will account for less than 1% of U.S. auto sales in 2018, or about 102,000 cars and light trucks. Including hybrids and plug-in hybrids the market share is forecast at 8%.
“The premiums associated with these products are still more than what the consumer is willing to bear,” says Mike VanNieuwkuyk, executive director of global vehicle research at J.D. Power.