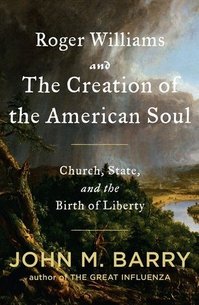 I have not yet read Barry’s book on Roger Williams, but I did enjoy and learn from his earlier The Great Influenza book.

(p. 12) Williams struck overland, through snow and bitter cold, “wch I feele yet,” he reminisced later in life. He survived because he had help. “The ravens fed me in the wilderness,” he said, comparing himself to the scriptural prophets sustained by bird-borne morsels, though his “ravens” were Indians. With their assistance, he reached the upper bend of a bay that would be named for its inhabitants, the Narragansett. There, Williams bought land from its native proprietors and established a settlement he called Providence, to honor the divine assistance given to him and other Christians on their flights from persecution.
. . .
Next, Williams refused to take an oath of fidelity to Massachusetts, on the grounds that anything sworn in God’s name for worldly purposes was corrupt.
The authorities in Massachusetts were so outraged that having failed to arrest Williams, they tried to obliterate his new settlement. He went back to England to get a charter to protect his colony on his own terms: with a “hedge or wall of Separation between the Garden of the Church and the Wildernes of the world.” In several publications, he argued that the individual conscience should not — could not — be governed, let alone persecuted. If God was the ultimate punisher of sin, it was impious for humans to assume his authority. And it was “directly contrary to the nature of Christ Jesus . . . that throats of men should be torne out for his sake.”
Barry shows how controversial these beliefs were at the time, and in this way reinforces the standard image of Williams as an early proponent of liberty of conscience.

For the full review, see:
JOYCE E. CHAPLIN. “Errand in the Wilderness.” The New York Times Book Review (Sun., May 26, 2012): 12.
(Note: ellipsis between paragraphs was added; ellipsis internal to quotation was in original.)
(Note: the online version of the review has the date May 25, 2012 and has the title “Roger Williams: The Great Separationist.”)

The book being reviewed, is:
Barry, John M. Roger Williams and the Creation of the American Soul: Church, State, and the Birth of Liberty. New York: Viking Adult, 2012.