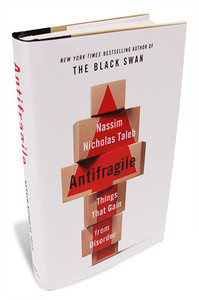 (p. C12) Nassim Nicholas Taleb’s “Antifragile” argues that some people, organizations and systems are resilient in the face of stress because they are able to alter themselves by adapting and learning. The converse is fragility, embodied in entities that are immovable even when faced with shocks or adversity. To my mind, an obvious example is how numerous governments and international agencies have clung to foreign aid as a tool to combat poverty even though aid has failed to deliver sustainable growth and meaningfully reduce indigence. And nation-states, which rest on one unifying vision of the nation, tend to be fragile, while city-states that adjust, adapt and constantly evolve tend to be antifragile. Mr. Taleb’s lesson: Embrace, rather than try to avoid, the shocks.

For the full review essay, see:
Dambisa Moyo (author of passage quoted above, one of 50 contributors to whole article). “Twelve Months of Reading; We asked 50 of our friends to tell us what books they enjoyed in 2012–from Judd Apatow’s big plans to Bruce Wagner’s addictions. See pages C10 and C11 for the Journal’s own Top Ten lists.” The Wall Street Journal (Sat., December 15, 2012): passim (Moyo’s contribution is on p. C12).
(Note: the online version of the review essay has the date December 14, 2012.)