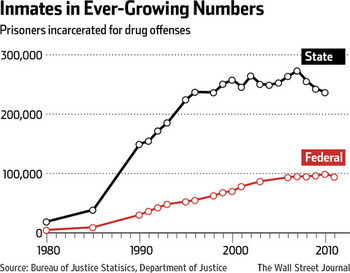 Source of graph: online version of the WSJ commentary quoted and cited below.

(p. C1) President Richard Nixon declared a “war on drugs” in 1971. The expectation then was that drug trafficking in the United States could be greatly reduced in a short time through federal policing–and yet the war on drugs continues to this day. The cost has been large in terms of lives, money and the well-being of many Americans, especially the poor and less educated. By most accounts, the gains from the war have been modest at best.

The direct monetary cost to American taxpayers of the war on drugs includes spending on police, the court personnel used to try drug users and traffickers, and the guards and other resources spent on imprisoning and punishing those convicted of drug offenses. Total current spending is estimated at over $40 billion a year.
These costs don’t include many other harmful effects of the war on drugs that are difficult to quantify. For example, over the past 40 years the fraction of students who have dropped out of American high schools has remained large, at about 25%. Dropout rates are not high for middle-class white children, but they are very high for black and Hispanic children living in poor neighborhoods. Many factors explain the high dropout rates, especially bad schools and weak family support. But another important factor in inner-city neighborhoods is the temptation to drop out of school in order to profit from the drug trade.
The total number of persons incarcerated in state and federal prisons in the U.S. has grown from 330,000 in 1980 to about 1.6 million today. Much of the increase in this population is directly due to the war on drugs and the severe punishment for persons convicted of drug trafficking. About 50% of the inmates in federal prisons and 20% of those in state prisons have been convicted of either selling or using drugs. The many minor drug traffickers and drug users who spend time in jail find fewer opportunities for legal employment after they get out of prison, and they develop better skills at criminal activities.
. . .
(p. C2) It is generally harder to break an addiction to illegal goods, like drugs. Drug addicts may be leery of going to clinics or to nonprofit “drugs anonymous” groups for help. They fear they will be reported for consuming illegal substances. Since the consumption of illegal drugs must be hidden to avoid arrest and conviction, many drug consumers must alter their lives in order to avoid detection.
Usually overlooked in discussions of the effects of the war on drugs is that the illegality of drugs stunts the development of ways to help drug addicts, such as the drug equivalent of nicotine patches. Thus, though the war on drugs may well have induced lower drug use through higher prices, it has likely also increased the rate of addiction. The illegality of drugs makes it harder for addicts to get help in breaking their addictions. It leads them to associate more with other addicts and less with people who might help them quit.
. . .
The decriminalization of both drug use and the drug market won’t be attained easily, as there is powerful opposition to each of them. The disastrous effects of the American war on drugs are becoming more apparent, however, not only in the U.S. but beyond its borders. Former Mexican President Felipe Calderon has suggested “market solutions” as one alternative to the problem. Perhaps the combined efforts of leaders in different countries can succeed in making a big enough push toward finally ending this long, enormously destructive policy experiment.

For the full commentary, see:
GARY S. BECKER and KEVIN M. MURPHY. “Have We Lost the War on Drugs? After more than four decades of a failed experiment, the human cost has become too high. It is time to consider the decriminalization of drug use and the drug market.” The Wall Street Journal (Sat., January 5, 2013): C1 & C2.
(Note: the online version of the commentary has the date January 4, 2013.)