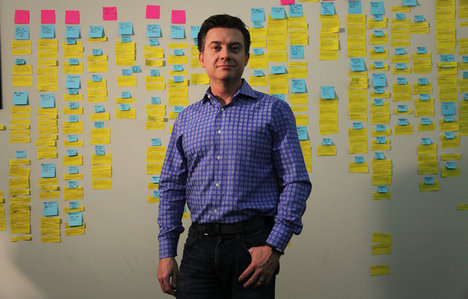 “Above, Robert Tinker, the chief executive of MobileIron, at its offices in Mountain View, Calif.” Source of caption and photo: online version of the NYT article quoted and cited below.

(p. B2) “There are disruptions everywhere,” said Robert Tinker, the chief executive of MobileIron, which makes software for companies to manage smartphones and tablets. “Mobile disrupts personal computers, a market worth billions. Cloud disrupts computer servers and data storage, billions of dollars more. Social may be one of those rare things that is totally new.”

Relative to the size of the markets that mobile devices, cloud computing and social media are toppling, he says, the valuations are reasonable.
But most of these chief executives are also veterans of the Internet bubble of the late ’90s, and confess to worries that maybe things are not so different this time. Mr. Tinker, 43, drives a 1995 Ford Explorer that has logged 265,000 miles.
“If somebody comes to a job interview here in a $100,000 car, I know he’s not hungry,” he said. “The reality is, I’ve taken $94 million in investors’ money, and we haven’t gone public yet. I feel that responsibility every day.”