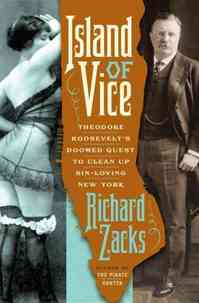 (p. C9) . . . as Richard Zacks’s excellent “Island of Vice: Theodore Roosevelt’s Doomed Quest to Clean Up Sin-Loving New York” ably shows, while we might like to believe that the stretch from 1970 to 1995 represents the city’s nadir, it was just about business as usual in New York over the centuries.

From its time as a Dutch colonial outpost, the city has always been pretty bad. You’d almost think New Yorkers prefer it that way. Of course, we don’t like fraud, robbery, assault, arson, rape or murder any more than anyone else does. But the deliberate injury of one’s fellow citizen isn’t the only way to break the law. There are also those crimes that fall under the broad category of “vice”: things such as gambling, prostitution, indecent exposure and selling alcohol at a convenient time. Historically, the average New Yorker has not greeted these acts with the same immediate urge to suppress that many of his or her fellow Americans have had. You don’t get a nickname like “The City That Never Sleeps” without having a certain amount of things worth staying up for.
. . .
In the end, Mr. Zacks’s exhaustively researched yet lively story is a classic battle between an irresistible force, Roosevelt’s ego, and an immovable object, the people of New York’s unwillingness to follow laws they thought were stupid. In this case, the object won, and handily. Mr. Zacks’s account of the way the city’s saloonkeepers instantly turned their establishments into hotels to take advantage of a loophole in the law is particularly amusing. Eventually, the police department, not unsympathetic to the Sunday tippler, began finding ways to wriggle out from under the commissioner’s thumb, and beer-friendly Tammany Hall, with the people solidly behind it, began peeling away his allies.