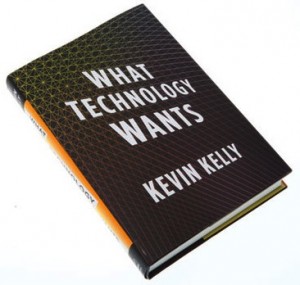 Kevin Kelly’s book has received a lot of attention, sometimes in conjunction with Steven Johnson’s Where Good Ideas Come From, with which it shares some themes. I found the Kelly book valuable, but frustrating.
The valuable part includes the discussion of the benefits of technology, and the chapter detailing Amish attitudes and practices related to technology. On the latter, for instance, I learned that the Amish do not categorically reject new technology, but believe that it should be adopted more slowly, after long community deliberation.
What frustrated me most about the book is that it argues that technology has a life of its own and that technological progress is predetermined and inevitable. (I believe that technological progress depends on enlightened government policies and active entrepreneurial initiative, neither of which is inevitable.)
In the next several weeks, I will be quoting some of the more important or thought-provoking passages in the book.

The Johnson book mentioned above, is:
Johnson, Steven. Where Good Ideas Come From: The Natural History of Innovation. New York: Riverhead Books, 2010.