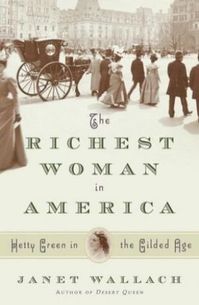 (p. C7) In business, Green routinely sued her competitors. . . .
. . .
It was precisely Green’s vision of life as a zero-sum game, a match between enemies, that proved her flaw. She appreciated the idea that dollars compound, but she never seemed to grasp that the compounding of ideas, innovation, is just as important, that in certain, non-litigious, environments ideas “fructify,” to use a period verb. Litigation like Green’s prevented the kind of innovation in which she might have wanted to invest. Wealth is created when Apple beats Samsung, but more wealth is created when Apple comes up with a new phone.

The book under review, is:
Wallach, Janet. The Richest Woman in America: Hetty Green in the Gilded Age. New York: Nan A. Talese, 2012.