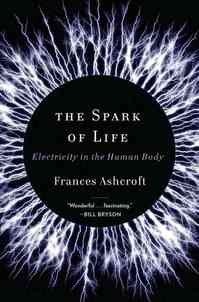 (p. C9) Top-drawer scientists always are excited about their field, but many have difficulty conveying this to a general audience. Not so Frances Ashcroft. She is a distinguished physiologist at Oxford University whose work has provided crucial insight into how insulin secretion is connected to electrical activity in cells. Her research has meant that children born with one form of diabetes can control it using oral medication instead of regular and painful insulin injections.

After Ms. Ashcroft made her breakthrough in 1984, she felt as if she were “dancing in the air, shot high into the sky on the rocket of excitement with the stars exploding in vivid colours all around me,” she writes in her engaging and informative “The Spark of Life: Electricity in the Human Body.” Even today, thinking of it “sends excitement fizzing through my veins.”
Like so much else in our bodies, insulin secretion depends on crucial proteins in the cell walls that regulate the flow of ions (electrically charged atoms or molecules) between the interior of the cell and the fluids that surround it. The ions, mostly sodium, potassium and calcium, literally provide “the spark of life.” Ms. Ashcroft uses her research into cellular “ion channels” as an overture to a rich and stimulating account of how electricity and the varied ways in which animals and plants produce it explain so much of evolutionary biology.
. . .
. . . all of Ms. Ashcroft’s themes and variations represent facets of the same underlying ionic mechanism. In describing its wonders, she has produced a gem that sparkles.

The book under review, is:
Ashcroft, Frances. The Spark of Life: Electricity in the Human Body. New York: W. W. Norton & Company, 2012.