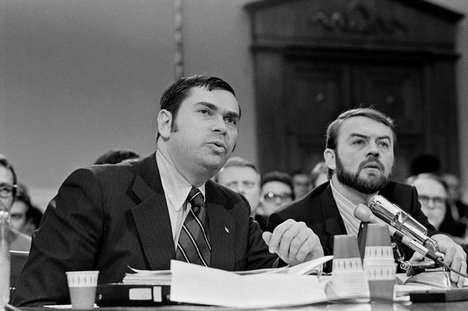 “Mr. Phillips [on left] was named the head of the Office of Economic Opportunity in 1973 during President Richard M. Nixon’s administration.” Source of caption and photo: online version of the NYT obituary quoted and cited below.

(p. A24) Howard J. Phillips, a pillar of conservative activism who ran for president three times on the ticket of a political party he helped found, died . . . at his home in Vienna, Va. He was 72.

. . .
Mr. Phillips’s integrity as a conservative was on display in President Richard M. Nixon’s administration. In early 1973, the president signaled his intention to withhold financing from the Office of Economic Opportunity, an antipoverty agency with roots in President Lyndon B. Johnson’s war on poverty. The president named Mr. Phillips acting director and charged him with dismantling it.
“I believe Richard Nixon epitomizes the American dream and represents all that is great in America,” Mr. Phillips said at the time.
Nixon was unable to carry out his plans, however, after Democrats successfully sued to prevent him from starving an agency that Congress had authorized. And when Nixon yielded and continued to finance Johnson’s Great Society programs, Mr. Phillips considered the president to have broken his word and resigned.