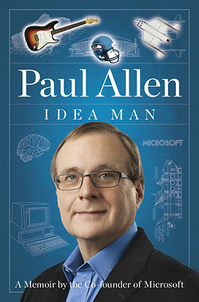 (p. C6) The first half of “Idea Man” sets forth Mr. Allen’s version of the Microsoft creation myth, depicting Mr. Gates as a petulant, ambitious and money-minded mogul-to-be and Mr. Allen as an underappreciated visionary. Pictures of them from the 1970s and early ’80s also tell this story, making Mr. Allen look like a hirsute, powerful older brother and Mr. Gates like a kid.
. . .
“Idea Man” is long overdue. It turns out to be as remote, yet as surpassingly strange, as its author, whose receipt of a diagnosis of Stage 4 non-Hodgkin’s lymphoma in 2009 has made it that much more important for him to tell his story. Though it is written in the smoothly proficient style of many a collaborator-assisted memoir, it is a book filled with wild extremes: breakthrough, breakup, power, indulgence, blue-sky innovation. And it winds up offering Mr. Allen’s guarded, partial answer to a universal question: what if you could make your wildest dreams come true?

The book under review is:
Allen, Paul. Idea Man: A Memoir by the Cofounder of Microsoft. New York: Portfolio, 2011.