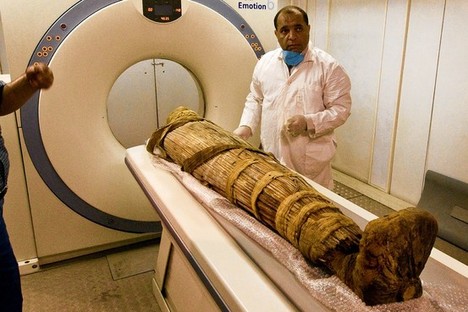 (p. A4) SAN FRANCISCO–It turns out there is nothing new about heart disease.

Researchers who examined 137 mummies from four cultures spanning 4,000 years said Sunday they found robust evidence of atherosclerosis, or hardening of the arteries, challenging widely held assumptions that cardiovascular disease is largely a malady of current times.
An international research team of cardiologists, radiologists and archeologists used CT scanners to evaluate the mummies, hunting for deposits of calcium in arterial walls that are a telltale sign of hardening of the arteries that can lead to heart attacks and strokes. They found that 47, or 34%, of the mummies had such deposits, suggesting, they said, that cardiovascular disease was more common in historic times than many experts think.
. . .
The same researchers reported similar findings in 2009 from Egyptian mummies. Because those specimens were believed to have been from the upper echelons of society, the researchers surmised their calcified arteries could have developed from high-fat diets. But by expanding the research to other cultures, including Puebloans of what is now the U.S. Southwest, the researchers believe all levels of society were at risk, regardless of diet.