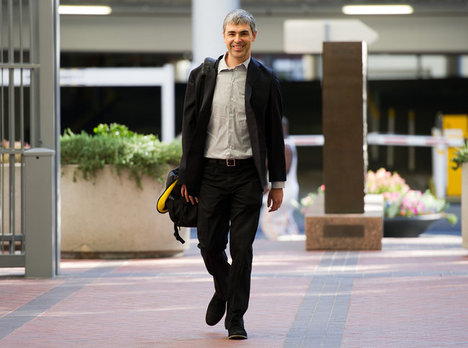 “Larry Page has pushed for quicker decision-making and jettisoned more than 25 projects that were not up to snuff.” Source of caption and photo: online version of the NYT article quoted and cited below.

(p. A1) MOUNTAIN VIEW, Calif. — Larry Page, Google’s chief executive, so hates wasting time at meetings that he once dumped his secretary to avoid being scheduled for them. He does not much like e-mail either — even his own Gmail — saying the tedious back-and-forth takes too long to solve problems.
. . .
(p. A3) Borrowing from the playbooks of executives like Steven P. Jobs and Mayor Michael R. Bloomberg, he has put his personal imprint on the corporate culture, from discouraging excessive use of e-mail to embracing quick, unilateral decision-making — by him, if need be.
“Ever since taking over as C.E.O., I have focused much of my energy on increasing Google’s velocity and execution, and we’re beginning to see results,” Mr. Page, 38, told analysts recently.
. . .
Despite the many external pressures on Google, it is dominant in its business and highly profitable. But, when asked at a recent conference about the biggest threat to his company, Mr. Page answered in one word, “Google.”
The problem was that the company had ballooned so quickly — it now has more than 31,000 employees and $27.3 billion in revenue so far this year — that it had become sclerotic. A triumvirate of Mr. Page, his co-founder, Sergey Brin, and Eric E. Schmidt, Google’s former chief and current chairman, had to agree before anything could be done. The unwieldy management and glacial pace of decision-making were particularly noticeable in the Valley, where start-ups overtake behemoths in months.
It is different now.
“It’s much more of a style like Steve Jobs than the three-headed monster that Google was,” said a former Google executive who has spoken with current executives about the changes and spoke anonymously to preserve business relationships. “When Eric was there, you’d walk into a product meeting or a senior staff meeting, and everyone got to weigh in on every decision. Larry is much more willing to make an O.K. decision and make it now, rather than a perfect decision later.”