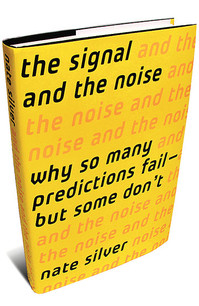 (p. 12) In recent years, the most sophisticated global-warming skeptics have seized on errors in the forecasts of the United Nations’ International Panel on Climate Change (I.P.C.C.) in order to undermine efforts at greenhouse gas reduction. These skeptics note that global temperatures have increased at only about half the rate the I.P.C.C. predicted in 1990, and that they flatlined in the 2000s (albeit after rising sharply in the late ’90s).

Silver runs the numbers to show that the past few decades of data are still highly consistent with the hypothesis of man-made global warming. He shows how, at the rate that carbon dioxide is accumulating, a single decade of flat temperatures is hardly invalidating. On the other hand, Silver demonstrates that projecting temperature increases decades into the future is a dicey proposition. He chides some environmental activists for their certainty — observing that overambitious predictions can undermine a cause when they don’t come to pass . . .

The book under review, is:
Silver, Nate. The Signal and the Noise: Why So Many Predictions Fail — but Some Don’t. New York: The Penguin Press, 2012.