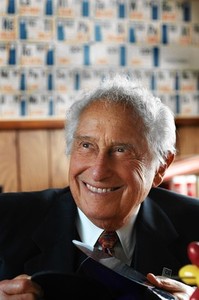 “Stanford Ovshinsky helped to establish a new field of physics.” Source of caption and photo: online version of the WSJ obituary quoted and cited below.

(p. B5) Inspired by the structure of the brain, Stanford Ovshinsky created a new class of semiconductors that helped lead to flat-panel displays, solar cells and nickel-metal hydride batteries for cars, laptops and cameras.

Mr. Ovshinsky, who died Wednesday [October 17, 2012] at age 89, was an industrialist and self-taught scientific prodigy who helped found a new field of physics that studies the electronics of amorphous materials resembling glass.
. . .
“It was like discovering a new continent, like discovering America,” said Hellmut Fritzsche, former chairman of physics department at the University of Chicago who worked with Mr. Ovshinsky. “Nobody in the past 50-60 years has created such a revolution in science.”
The new materials–dubbed ovonics–were switches like transistors but worked better for many applications.
Mr. Ovshinsky used his discovery to fund a publicly traded research laboratory that teamed up with companies such as 3M Co., Atlantic Richfield Oil Corp. and General Motors, for which he developed the battery that powered the EV1, GM’s electric car.
Companies around the world license his patents.
What made Mr. Ovshinsky’s work particularly remarkable was that he had little connection to mainstream physics.
His education stopped after high school, . . .