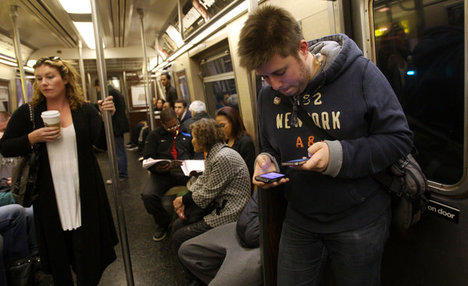 (p.24) The current spate of iPhone thefts feels, if anything, more poignant than disruptive. Apple products have always read as cooler than their rivals’ because their design suggests a gleaming world of innovation and opportunity, of capitalism behaving well — a world that seems ever diminishing, ever less accessible to the struggling and young.

Unlike the sneakers and glasses that caused such a fury in the ’80s and ’90s, iPhones didn’t originate in the celebrity system. They come with a democratic ethos (if not the analogous price tag); BlackBerrys are for suits, but even a child can work an iPhone. Wasn’t everyone supposed to have a shot?

For the full story, see:
GINIA BELLAFANTE. “BIG CITY; Easy to Use and Easy to Steal, a Status Object Inches Out of Reach.” The New York Times, First Section (Sun., October 30, 2011): 24.
(Note: the first paragraph quoted above is from the print version, rather than from the somewhat different online version. The second quoted paragraph is the same in both versions.)
(Note: the online version of the story has the date October 28, 2011, and has the slightly different title “BIG CITY; Easy to Use, or Steal, but Inching Out of Reach.”)