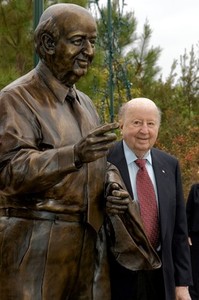 “George P. Mitchell with a statue of himself at The Woodlands in 2007.” Source of caption and photo: online version of the WSJ obituary quoted and cited below.

(p. B3) George P. Mitchell turned hydraulic fracturing from an experimental technique into an energy-industry mainstay, making it possible to pump oil and gas from once untappable rocks and unleashing an energy boom across the U.S.

Known as the father of fracking, Mr. Mitchell died Friday [July 26, 2013] at age 94 at his home in Galveston, Texas.
. . .
“George Mitchell, more than anyone else, is responsible for the most important energy innovation of the 21st century,” said Daniel Yergin, vice chairman of consulting firm IHS and a Pulitzer Prize winning author on energy.
. . .
His first efforts at fracking, in the late 1970s, were expensive, and at times investors and his board of directors questioned the spending. But by the late 1990s the company had figured out the right mix of techniques and materials to produce shale gas economically, and began to do so on a major scale.
Devon Energy Corp. bought Mr. Mitchell’s firm in 2002 for $3.1 billion, combined the hydraulic fracturing techniques with horizontal drilling, and helped launch the current surge in oil and gas production.