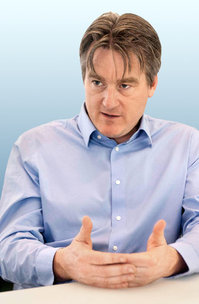 “Paul English, the co-founder of Kayak, said the company valued testing new ideas, not talking about them.” Source of caption and photo: online version of the NYT article quoted and cited below.

(p. B2) Q. You were a co-founder of Kayak nine years ago. What’s unusual about the culture?

A. We’re a little bit reckless in our decision-making — not with the business, but the point is that we try things. We give even junior people scary amounts of power to come up with ideas and implement them. We had an intern last summer who, on his very first day at Kayak, came up with an idea, wrote the code and released it. It may or may not have been successful, but it almost doesn’t matter, because it showed that we value speed, and we value testing ideas, not talking about them.
. . .
Q. What else?
A. We’re known for having very small meetings, usually three people. There’s a little clicker for counting people that hangs on the main conference room door. The reason it’s there is to send a message to people that I care about this issue. If there’s a bunch of people in the room, I’ll stick my head in and say, “It takes 10 of you to decide this? There aren’t three of you smart enough to do this?”
I just hate design by consensus. No innovation happens with 10 people in a room. It’s very easy to be a critic and say why something won’t work. I don’t want that because new ideas are like these little precious things that can die very easily. Two or three people will nurture it, and make it stronger, give it a chance to see life.

For the full interview, see:
ADAM BRYANT, interviewer. “CORNER OFFICE; Paul English; Ten People in a Meeting Is About Seven Too Many.” The New York Times (Fri., July 26, 2013): B2.
(Note: ellipsis added; bold and italics in original.)
(Note: the online version of the interview has the date July 25, 2013, and has the title “CORNER OFFICE; Paul English of Kayak, on Nurturing New Ideas.”)