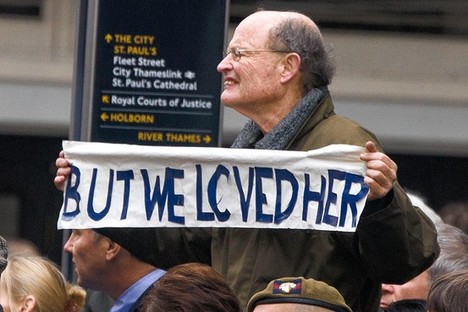 “A supporter of Margaret Thatcher holds a banner outside St. Clement Danes church in London.” Source of caption and photo: online version of the WSJ article quoted and cited below.

(p. A15) The funeral of Margaret Thatcher was beautiful, moving, just right. It had dignity and spirit, and in that respect was just like her. It also contained a surprise that shouldn’t have been a surprise. It was a metaphor for where she stood in the pantheon of successful leaders of the 20th century.
. . .
At the end of the funeral they all marched down the aisle in great procession–the family, the queen, the military pallbearers carrying the casket bearing the Union Jack. The great doors flung open, the pallbearers marched forward, and suddenly from the crowd a great roar. We looked at each other. Demonstrators? No. Listen. They were cheering. They were calling out three great hurrahs as the pallbearers went down the steps. Then long cheers and applause. It was electric.
England came. The people came. Later we would learn they’d stood 30 deep on the sidewalk, that quiet crowds had massed on the Strand and Fleet Street and Ludgate Hill. A man had held up a sign: “But We Loved Her.”
. . . When they died, Ronald Reagan, John Paul II, and Margaret Thatcher were old and long past their height of power. Everyone was surprised when Reagan died that crowds engulfed the Capitol; people slept on sidewalks to view him in state. When John Paul died the Vatican was astonished to see millions converge. “Santo Subito.”
And now at the end some came for Thatcher, too.
What all three had in common: No one was with them but the people.
Margaret Hilda Thatcher, rest in peace.

For the full commentary, see:
PEGGY NOONAN. “DECLARATIONS; Britain Remembers a Great Briton; Margaret Thatcher’s coffin stood over he crypts that hold the tombs of Nelson and Wellington. It mattered.” The Wall Street Journal (Sat., April 20, 2013): A15.
(Note: the online version of the story was updated April 22, 2013 (I did not see any update in the part I quoted above), and has the title “DECLARATIONS; Noonan: Britain Remembers a Great Briton; Mrs. Thatcher is with Wellington and Nelson now.”)