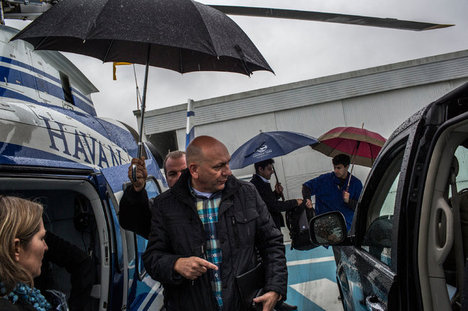 The co-founder of the Havan chain, Luciano Hang, arrives at the chain’s flagship store, which is in Brusque, Brazil. Source of photo: online version of the NYT article quoted and cited below.

(p. 6) “My philosophy is pro-capitalism, so of course the best symbols for this come from the United States,” said Mr. Hang, who flies around Brazil on a Learjet to visit the nearly 60 stores in his chain, called Havan. “I tell people that we’re about freedom: the freedom to stay open when we choose, the freedom to work for us and the freedom to shop,” he added. “I know this can be controversial, but I think those who disagree with my approach are few and far between.”
. . .
The son of textile factory workers, descended from German and Italian immigrants, Mr. Hang said he admired European culture but preferred the United States. He said he was inspired by a show on the History Channel, “The Men Who Built America,” about industrial titans like John D. Rockefeller and Cornelius Vanderbilt.
“I couldn’t sleep after I saw that program,” he said.
His business model is partly based on Walmart, whose small-town origins he admires, as well as its method of turning economies of scale into low prices.