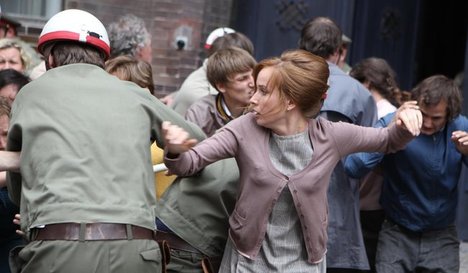 “BURNING BUSH; Tatiana Pauhofova in Agnieszka Holland’s story of Prague under Communism.” Source of caption and photo: online version of the NYT review quoted and cited below.

(p. C6) The Polish director Agnieszka Holland’s magnificent docudrama, “Burning Bush,” is a three-part mini-series made for HBO Europe that remembers the Soviet crackdown in Czechoslovakia following the Prague Spring. It begins with the death in 1969 of Jan Palach, a Czech student who set himself on fire as a political protest, and follows the diabolical attempts of the Soviet occupiers to blacken his name by portraying him as a fraud and right-wing tool. The film’s depiction of the Communist regime’s relentless harassment of his family and its sowing of paranoia within the student resistance recalls the 2007 film “The Lives of Others,” about the Stasi’s operations in East Berlin. In the sophisticated worldview of “Burning Bush,” oppression may win in the short term, but the spark that ignites freedom movements, once lighted, can’t be extinguished.