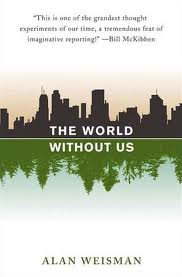 When I saw the mention of this book, quoted below, I thought it must be closely related to the 2008 History Channel program “Life Without Us” that I liked very much. Apparently the two overlap on the message that a post-human planet Earth would quickly return to its pre-human condition, but they differ in that the program does not share the book’s anti-technology leitmotif.
The main take-away from the program, for me, was that environmentalists worry too much about the long-term damage that humans can do to the planet—for the most part, the planet is pretty resilient and can quickly return itself to something close to its pre-human condition.

(p. C10) Mr. Weisman’s 2007 book, “The World Without Us,” was a surprise best seller that imagined what would happen to the planet were all humans to suddenly disappear. Turns out that nature would in short order erase pretty much everything we’ve done.

Source:
MICHAEL SHERMER. “Menace to the Planet?” The Wall Street Journal (Sat., Oct. 5, 2013): C10.
(Note: the online version of the review has the date Oct. 4, 2013, and has the title “BOOKSHELF; Book Review: ‘Ten Billion’ by Stephen Emmott | ‘Countdown’ by Alan Weisman; While some worry a booming population doom the planet, in many Western countries there is now a birth dearth.”)

The book mentioned is:
Weisman, Alan. The World without Us. New York: Thomas Dunne Books, 2007.