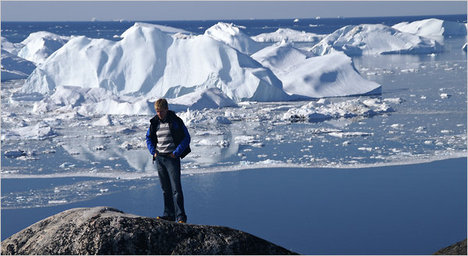 “The Danish economist Bjorn Lomborg in “Cool It,” a documentary based on his book.” Source of caption and photo: online version of the NYT review quoted and cited below.

(p. C8) Debunking claims made by “An Inconvenient Truth” and presenting alternative strategies, “Cool It” finally blossoms into an engrossing, brain-tickling picture as many of Al Gore’s meticulously graphed assertions are systematically — and persuasively — refuted. (I was intrigued to hear Mr. Lomborg say, for instance, that the polar-bear population is more endangered by hunters than melting ice.)
. . .
. . . “Cool It” is all about the pep: playing down the talking heads and playing up the “git ‘er done.” If algae can suck up carbon dioxide and spit out oil, what on earth are we worrying about?

The documentary is based on the book:
Lomborg, Bjørn. Cool It: The Skeptical Environmentalist’s Guide to Global Warming. New York: Alfred A. Knopf, 2007.