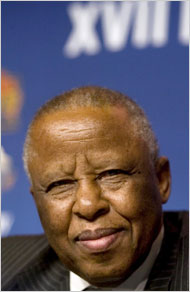 “Festus G. Mogae, trained as an economist, was Botswana’s president for two terms.” Source of caption and photo: online version of the NYT article quoted and cited below.

(p. A10) JOHANNESBURG — A foundation dedicated to celebrating and encouraging good government in Africa awarded its annual prize on Monday to Botswana’s former president, Festus G. Mogae. He was honored for consolidating his nation’s democracy, ensuring that its diamond wealth enriched its people and providing bold leadership during the AIDS pandemic.

Mr. Mogae, 69, a man with a modest style, will receive $5 million over the next 10 years and $200,000 per year thereafter for the rest of his life. Over the coming decade, the foundation may also grant another $200,000 a year to causes of Mr. Mogae’s choice.
The award, the Mo Ibrahim Prize for Achievement in African Leadership, is bestowed by the Mo Ibrahim Foundation, named after its founder, a Sudanese billionaire.