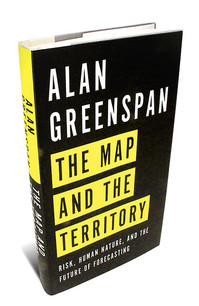 (p. C11) In his new book “The Map and the Territory,” to be released on Tuesday, Mr. Greenspan, 87, goes on a hunt for what has gone wrong in American politics and in the U.S. economy.
. . .
Mr. Greenspan’s biggest revelation came one day about a year ago when he was playing with gross domestic savings numbers. What he found, to his surprise and initial skepticism, was that an increase in entitlements has closely corresponded to a decline in the country’s savings. “We had this extraordinary increase in benefits, with each party trying to outbid the other,” he says. “That practice has been eroding the country’s flow of savings that’s so critical in financing our capital investment.” The decline in savings has been partly offset by borrowing from abroad, which brings us to our current foreign debt: “$5 trillion and counting,” he says.
. . .
Studying the minutiae of the events leading to the financial crisis brought to mind some lessons from his famous friendship, from the 1950s on, with the late Objectivist philosopher Ayn Rand.
. . .
Mr. Greenspan then believed in analysis based mainly on hard science and empirical facts. Rand told him that unless he considered human nature and its irrational side, he would “miss a very large part of how human beings behaved.” At the time they weren’t discussing economics, but today he realizes the full impact of emotions and instincts on markets. He also has come to admire psychologist and Princeton University professor emeritus Daniel Kahneman’s work applying psychological insights to economic theory, for which he won a Nobel Prize in 2002.
. . .
With his new book, Mr. Greenspan hopes to provide politicians and the public with a road map to avoid making the same mistakes again. His suggestions include reducing entitlements, embracing “creative destruction” by letting facilities with cutting-edge technology displace those with low productivity, and fixing the political system by encouraging bipartisanship.

For the full interview/review, see:
ALEXANDRA WOLFE, interviewer/reviewer. “WEEKEND CONFIDENTIAL; Alan Greenspan.” The Wall Street Journal (Sat., Oct. 19, 2013): C11.
(Note: ellipses added.)
(Note: the online version of the interview/review has the date Oct. 18, 2013, and has the title “WEEKEND CONFIDENTIAL; Alan Greenspan: What Went Wrong; The former Fed chairman on where the economy went wrong, where he went wrong–and Ayn Rand.”)

The book discussed is:
Greenspan, Alan. The Map and the Territory: Risk, Human Nature, and the Future of Forecasting. New York: Penguin Press, 2013.