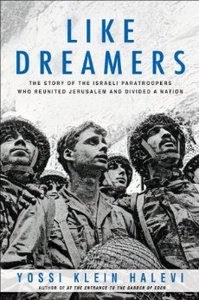 (p. C2) Mr. Halevi, an American immigrant who has worked as a journalist and analyst in Jerusalem for 30 years, has created a textured, beautifully written narrative by focusing on seven men — and they are all men — . . . , who served in the paratroop brigade that conquered the Old City of Jerusalem in the 1967 war.
. . .
. . . , the men Mr. Halevi has chosen are compelling. One is Arik Achmon, a secular liberal from a kibbutz who helped transform Israel’s failing statist economy into a thriving capitalist one. Mr. Achmon helped found the first private domestic airline in Israel. The story of how he stood down the once-powerful Histadrut trade union federation to keep his company alive illustrates the enormous changes that Israeli society has undergone in the past three decades.

For the full review, see:
ETHAN BRONNER. “BOOKS OF THE TIMES; 7 Paratroopers and Paths They Took Through an Israel at a Crossroads.” The New York Times (Thurs., September 26, 2013): C2.
(Note: ellipses added.)
(Note: the online version of the review has the date September 25, 2013.)

The book under review is:
Halevi, Yossi Klein. Like Dreamers: The Story of the Israeli Paratroopers Who Reunited Jerusalem and Divided a Nation. New York: HarperCollins, 2013. 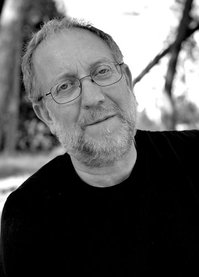 “Yossi Klein Halevi.” Source of caption and photo: online version of the NYT review quoted and cited above.