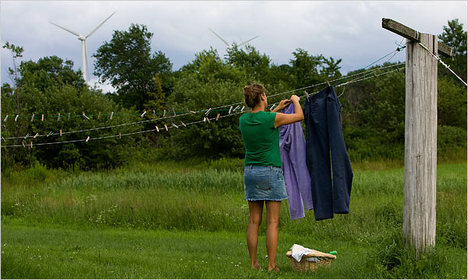 “Kathy Laclair of Churubusco, N.Y., dislikes the noise from the wind turbine blades and says their shadows give her vertigo.” Source of caption and photo: online version of the NYT article quoted and cited below.

(p. A1) Lured by state subsidies and buoyed by high oil prices, the wind industry has arrived in force in upstate New York, promising to bring jobs, tax revenue and cutting-edge energy to the long-struggling region. But in town after town, some residents say, the companies have delivered something else: an epidemic of corruption and intimidation, as they rush to acquire enough land to make the wind farms a reality.

“It really is renewable energy gone wrong,” said the Franklin County district attorney, Derek P. Champagne, who began a criminal inquiry into the Burke Town Board last spring and was quickly inundated with complaints from all over the state about the (p. A16) wind companies.
. . .
. . . corruption is a major concern. In at least 12 counties, Mr. Champagne said, evidence has surfaced about possible conflicts of interest or improper influence.
In Prattsburgh, N.Y., a Finger Lakes community, the town supervisor cast the deciding vote allowing private land to be condemned to make way for a wind farm there, even after acknowledging that he had accepted real estate commissions on at least one land deal involving the farm’s developer.
A town official in Bellmont, near Burke, took a job with a wind company after helping shepherd through a zoning law to permit and regulate the towers, according to local residents. And in Brandon, N.Y., nearby, the town supervisor told Mr. Champagne that after a meeting during which he proposed a moratorium on wind towers, he had been invited to pick up a gift from the back seat of a wind company representative’s car.
When the supervisor, Michael R. Lawrence, looked inside, according to his complaint to Mr. Champagne, he saw two company polo shirts and a leather pouch that he suspected contained cash.
When Mr. Lawrence asked whether the pouch was part of the gift, the representative replied, “That’s up to you,” according to the complaint. 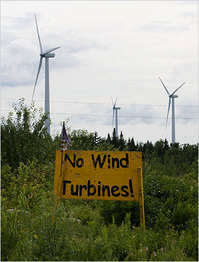 “To some upstate towns, wind power promises prosperity. Others fear noise, spoiled views and the corrupting of local officials.” Source of caption and photo: online version of the NYT article quoted and cited above.