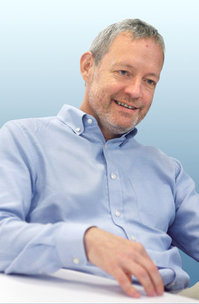 “”It’s a myth that most C.E.O.’s are extroverts,” says Dwight Merriman, chairman and co-founder of MongoDB, an open-source document database. He has overcome his own earlier shyness, he says, and relies on enthusiasm for his work.” Source of caption and photo: online version of the NYT interview quoted and cited below.

A. I am.
Q. You were C.E.O. of MongoDB for five years before becoming chairman, and a big part of that job no doubt required you to spend a lot of time with people and give a lot of talks. How did you handle that?
A. I think 95 percent of the time you can get past that with just sheer brute force. I remember public-speaking class in college. I really didn’t want to do it. But today, when I give talks to 1,000 people, I’m not nervous at all. I think you get used to it. You just have to force yourself out of your comfort zone.
And it’s a myth that most C.E.O.’s are extroverts. Many are, but probably no more than the general population. I do what works for me, which is being enthusiastic and passionate about what we’re doing. You’ve just got to find what works for you.

For the full interview, see:
ADAM BRYANT. “CORNER OFFICE: Dwight Merriman; Being an Effective Leader Without Being an Extrovert.” The New York Times (Fri., November 1, 2013): B2.
(Note: bold and italics in original.)
(Note: the online version of the interview has the date October 31, 2013, and has the title “CORNER OFFICE; Dwight Merriman of MongoDB on Leading by Enthusiasm.”)