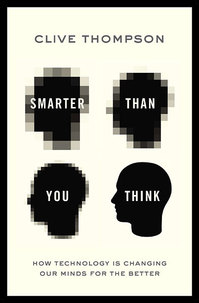 (p. 11) Clive Thompson, a Brooklyn-based technology journalist, uses this tale to open “Smarter Than You Think,” his judicious and insightful book on human and machine intelligence. But he takes it to a more interesting level. The year after his defeat by Deep Blue, Kasparov set out to see what would happen if he paired a machine and a human chess player in a collaboration. Like a centaur, the hybrid would have the strength of each of its components: the processing power of a large logic circuit and the intuition of a human brain’s wetware. The result: human-machine teams, even when they didn’t include the best grandmasters or most powerful computers, consistently beat teams composed solely of human grandmasters or superfast machines.

Thompson’s point is that “artificial intelligence” — defined as machines that can think on their own just like or better than humans — is not yet (and may never be) as powerful as “intelligence amplification,” the symbiotic smarts that occur when human cognition is augmented by a close interaction with computers.

Book under review:
Thompson, Clive. Smarter Than You Think: How Technology Is Changing Our Minds for the Better. New York: Penguin Press, 2013.