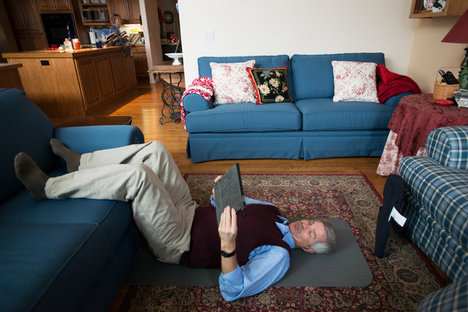 “Dr. Daniel Davidson, an Idaho dentist, has pelvic pain so severe that he cannot sit, and can stand for only limited periods.” Source of caption and photo: online version of the NYT article quoted and cited below.

(p. A18) After visiting dozens of doctors and suffering for nearly five years from pelvic pain so severe that he could not work, Daniel Davidson, 57, a dentist in Dalton Gardens, Idaho, finally found a specialist in Phoenix who had an outstanding reputation for treating men like him.

Dr. Davidson, whose pain followed an injury, waited five months for an appointment and even rented an apartment in Phoenix, assuming he would need surgery and time to recover.
Six days before the appointment, it was canceled. The doctor, Michael Hibner, an obstetrician-gynecologist at St. Joseph’s Hospital and Medical Center, had learned that members of his specialty were not allowed to treat men and that if he did so, he could lose his board certification — something that doctors need in order to work.
The rule had come from the American Board of Obstetrics and Gynecology. On Sept. 12, it posted on its website a newly stringent and explicit statement of what its members could and could not do. Except for a few conditions, gynecologists were prohibited from treating men. Pelvic pain was not among the exceptions.
Dr. Davidson went home, close to despair. His condition has left him largely bedridden. The pain makes it unbearable for him to sit, and he can stand for only limited periods before he needs to lie down.
“These characters at the board jerked the rug out from underneath me,” he said.