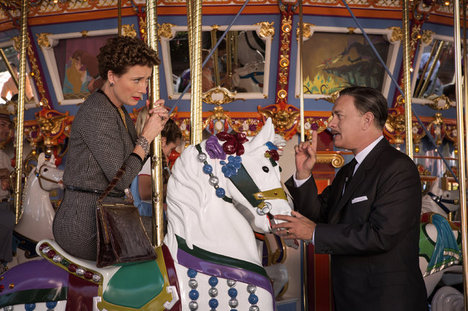 “Emma Thompson and Tom Hanks in “Saving Mr. Banks,” directed by John Lee Hancock.” Source of caption and photo: online version of the NYT article quoted and cited below.

I’m a fan of Disney the entrepreneur and I think that Hanks does a good job of showing that side of Disney. It’s a movie made by the Disney company, but has a darker, more adult-themed, side than most “Disney” movies. It’s not on my all-time-top-10-list. But we enjoyed it, overall. (Paul Giamatti is wonderful.)

(p. C8) “Saving Mr. Banks,” released by Disney, is a movie about the making of a Disney movie (“Mary Poppins”), in which Walt Disney himself (played by Tom Hanks) is a major character. It includes a visit to Disneyland and, if you look closely, a teaser for its companion theme park in Florida (as yet unbuilt, when the story takes place). A large Mickey Mouse plush toy appears from time to time to provide an extra touch of humor and warmth. But it would be unfair to dismiss this picture, directed by John Lee Hancock from a script by Kelly Marcel and Sue Smith, as an exercise in corporate self-promotion. It’s more of a mission statement.
. . .
. . . Walt is less a mogul than a kind and reliable daddy. He dotes on his intellectual properties (the mouse, the park, the picture) as if they were his children. He wants to adapt Mrs. Travers’s novel to keep a promise to his daughters.
. . .
. . . Walt, in a late, decisive conversation, explains that their job as storytellers is to “restore order” to the chaos of life and infuse bleak realities with bright, happy colors.