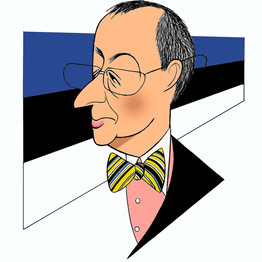 Toomis Hendrick Ilves, President of Estonia. Source of photo: online version of the WSJ article quoted and cited below.

(p. A13) Perched alone up in eastern Baltic are Lithuania, Latvia and Estonia. Their fear of Moscow propelled them to become the first and only former Soviet republics to seek the refuge of NATO. But now doubts are appearing. The West has responded tepidly to the Crimean aggression. Military budgets are at historic lows as a share of NATO economies. The alliance, which marked its 65th anniversary on Friday, has never faced the test of a hot conflict with Moscow.

In this new debate over European security, Mr. Ilves plays a role out of proportion to Estonia’s size (1.3 million people) and his limited constitutional powers. A tall man who recently turned 60, he has the mouth of a New Jersey pol–he grew up in Leonia–and wears the bow ties of a lapsed academic. Americans may recall his Twitter TWTR -0.15% feud two years ago over Estonia’s economy with economist Paul Krugman, whom Mr. Ilves called “smug, overbearing & patronizing.”
. . .
Estonia managed on Thursday to get NATO’s blessing to turn the brand-new Amari military airfield near Tallinn into the first NATO base in the country. This small Balt tends to be proactive. While European governments axed some $50 billion from military budgets in the last five year amid fiscal belt-tightening, Estonia is only one of four NATO allies to devote at least 2% of gross domestic product to defense, supposedly the bare minimum for security needs.
“It lessens your moral clout if you have not done what you have agreed to do,” Mr. Ilves says of defense budgets. His barb hits directly at neighboring Lithuania and Latvia, which both spend less than 1% of GDP on their militaries.

For the full commentary, see:
MATTHEW KAMINSKI. “THE SATURDAY INTERVIEW; An American Ally in Putin’s Line of Fire; Estonia’s president, who was raised in New Jersey, on how Crimea has changed ‘everything’ and what NATO should do now.” The Wall Street Journal (Sat., April 5, 2014): A13.
(Note: ellipsis added.)
(Note: the online version of the commentary has the date April 4, 2014.)