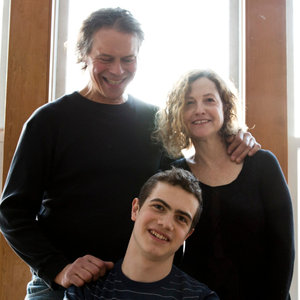 “Louis Harboe with his parents, Frederik Harboe and Catherine Becker. Louis, now 18, got his first freelance tech job at age 12. Last year, he attended the Apple Worldwide Developers Conference in San Francisco.” Source of caption and photo: online version of the NYT article quoted and cited below.

(p. 1) Ryan was headed to South by Southwest Interactive, the technology conference in Austin. There, he planned to talk up an app that he and a friend had built. Called Finish, it aimed to help people stop procrastinating, and was just off its high in the No. 1 spot in the productivity category in the Apple App store.
. . .
Ryan is now 17, a senior at Boulder High. He is among the many entrepreneurially minded, technologically skilled teenagers who are striving to do serious business. Their work is enabled by low-cost or free tools to make apps or to design games, and they are encouraged by tech companies and grown-ups in the field who urge them, sometimes with financial support, to accelerate their transition into “the real world.” This surge in youthful innovation and entrepreneurship looks “unprecedented,” said Gary Becker, a University of Chicago economist and a Nobel laureate.
Dr. Becker is assessing this subject from a particularly intimate vantage point. His grandson, Louis Harboe, 18, is a friend of (p. 6) Ryan’s, a technological teenager who makes Ryan look like a late bloomer. Louis, pronounced Louie, got his first freelance gig at the age of 12, designing the interface for an iPhone game. At 16, Louis, who lives with his parents in Chicago, took a summer design internship at Square, an online and mobile payment company in San Francisco, earning $1,000 a week plus a $1,000 housing stipend.
Ryan and Louis, who met online in the informal network of young developers, are hanging out this weekend in Austin at South by Southwest. They are also waiting to hear from the colleges to which they applied last fall — part of the parallel universe they also live in, the traditional one with grades and SATs and teenage responsibilities. But unlike their peers for whom college is the singular focus, they have pondered whether to go at all. It’s a good kind of problem, the kind faced by great high-school athletes or child actors who can try going pro, along with all the risk that entails.
Dr. Becker, who studies microeconomics and education, has been telling his grandson: “Go to college. Go to college.” College, he says, is the clear step to economic success. “The evidence is overwhelming.”
But the “do it now” idea, evangelized on a digital pulpit, can feel more immediate than academic empiricism. “College is not a prerequisite,” said Jess Teutonico, who runs TEDxTeen, a version of the TED talks and conferences for youth, where Ryan spoke a few weeks ago. “These kids are motivated to take over the world,” she said. “They need it fast. They need it now.”