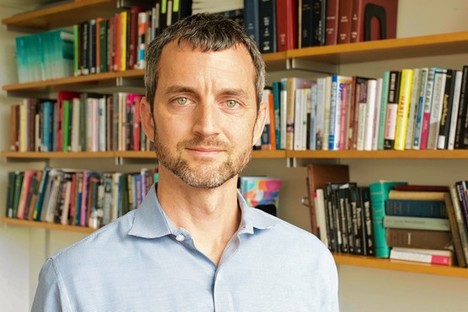 “Economist Matthew Gentzkow found media slant to be a function of audience preference.” Source of caption and photo: online version of the WSJ article quoted and cited below.

(p. A2) An economist known for pioneering work on slanted coverage in the news media won the John Bates Clark Medal, one of the profession’s most prestigious honors.

Matthew Gentzkow, a professor at the University of Chicago’s Booth School of Business, on Thursday was awarded the Clark medal by the American Economic Association, which every year honors the nation’s most promising economist under age 40.
. . .
A big theme in Mr. Gentzkow’s work is finding innovative ways to tackle questions that expand economists’ tool kits.
. . . , in 2008, he and Mr. Shapiro examined the fact that different parts of the U.S. got access to television at different times to gauge TV’s effects on high-school students in the 1960s.
The economists found that children who lived in cities that gave them more exposure to TV in early childhood performed better on tests than those with less exposure. The work also suggested TV helped American children in non-English-speaking households do better in school.

The Gentzkow and Shapiro paper on the effects of television, is:
Gentzkow, Matthew, and Jesse M. Shapiro. “Preschool Television Viewing and Adolescent Test Scores: Historical Evidence from the Coleman Study.” Quarterly Journal of Economics 123, no. 1 (Feb. 2008): 279-323.