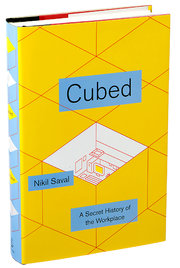 (p. C3) Open-office plans–then as now–mean noise, both visual and aural. People used to private offices couldn’t concentrate because of all the chatter and typing. For all the supposed egalitarianism of the office landscape, managers usually allotted themselves more space than junior staff, and the creative use of screens and extra plants often let them carve out ad hoc private offices for themselves. By the 1970s, European workers’ councils had rejected open-office plans, insisting that employees across the continent be granted private offices.
In the U.S., however, the open-plan remained unchallenged–until Propst. He concluded that office workers needed autonomy and independence–and therefore offered a flexible, three-walled design that could be reshaped to any given need.
. . .
Many workers I’ve spoken to in open offices find concentration and privacy elusive–and often miss their cubicles.

For the full commentary, see:
NIKIL SAVAL. “When Office Cubicles Looked Like Progress.” The Wall Street Journal (Sat., May 10, 2014): C3.
(Note: ellipsis added.)
(Note: the online version of the commentary has the date May 9, 2014, and has the title “A Brief History of the Dreaded Office Cubicle.”)

For more of Saval’s observations on the cubicle, see:
Saval, Nikil. Cubed: A Secret History of the Workplace. New York: Doubleday, 2014.