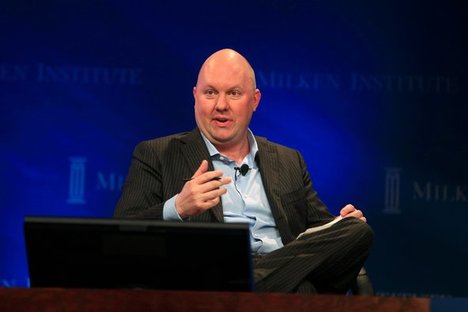 “Marc Andreessen, co-founder of the first major web browser, Netscape, has a record for knowing what’s coming next with technology.” Source of caption and photo: online version of the NYT article quoted and cited below.

Over the past couple of years, venture firms have invested in start-ups in Los Angeles, New York, Chicago and all over China. Los Angeles, for example, is home to Snapchat, Tinder, Whisper, Oculus VR and Beats, some of the big tech stories of the year. Mr. Andreessen said another hot place is Atlanta, the home of Georgia Tech.
But he offers a caveat.
“My personal view is that Silicon Valley will continue to take a disproportionate share of the No. 1 positions in great new markets, and I think that’s just a reflection that the fact that the valley works as well as it does,” Mr. Andreessen said.
There is a caveat to his caveat.
In Mr. Andreessen’s view, there shouldn’t be 50 Silicon Valleys. Instead, there should be 50 different kinds of Silicon Valley. For example, there could be Biotech Valley, a Stem Cell Valley, a 3-D Printing Valley or a Drone Valley. As he noted, there are huge regulatory hurdles in many of these fields. If a city wanted to spur innovation around drones, for instance, it might have to remove any local legal barriers to flying unmanned aircraft.

For the full interview, see:
NICK BILTON. “DISRUPTIONS; Forecasting the Next Big Moves in Tech.” The New York Times (Mon., MAY 19, 2014): B8.
(Note: the online version of the interview has the date MAY 18, 2014, and has the title “DISRUPTIONS; Marc Andreessen on the Future of Silicon Valley(s), and the Next Big Technology.” )