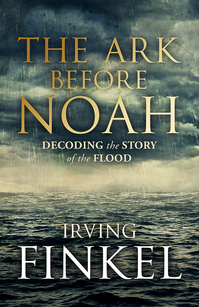 (p. C8) Mr. Finkel, a curator of cuneiform inscriptions at the British Museum, details his own long-standing fascination with the ark and that of his British Museum predecessors. First among these was George Smith, who in 1872, at age 32, deciphered a clay tablet that demonstrated that 1,000 years before the likely composition of the Book of Genesis, ancient Babylonians had been brooding over the same story of divine retribution that we find in the biblical account of Noah. So great was Smith’s shock that, on confirmation, he began to run about the room tearing off his clothes.
. . .
The tablets containing what we now know as the Epic of Gilgamesh were unearthed in the ruins of Nineveh, capital of the last great Assyrian king, Ashurbanipal, who was an avid collector of texts. His famous library was torched in 612 B.C., but, as Mr. Finkel points out, “fire to a clay librarian” is not the disaster it is to one who studies works on paper. Fired clay tablets endure, and nothing, Mr. Finkel assures us, can equal the thrill of digging one out from the earth like a potato.
But the most important tablet of Mr. Finkel’s career didn’t come from the ground. It was delivered to him in 1985 by a man named Douglas Simmonds, who brought in a number of cuneiform tablets collected by his father, a member of the Royal Air Force in the Middle East at the end of World War II. One of these–an iPhone-shaped tablet–had what was recognizably the first lines of a Babylonian flood narrative, but the rest was illegible at a superficial glance, and Simmonds was reluctant to leave the tablet at the museum for analysis. It wasn’t until 2009 that Mr. Finkel was able to borrow this treasure and undertake a meticulous study, which revealed an “instruction manual for building an ark” in the tablet’s 60 lines.
. . .
So then what was the Ark Tablet for? It is puzzling that it contains no narrative, listing rather shape, size, materials and their quantities. Attractive though it may be to think it was a hand-held guide for the boat builder, Mr. Finkel suggests instead that it served as an aide-mémoire for an itinerant storyteller. The detail is explained by audience demand: No one wants to be put on the spot with difficult “how” questions when facing an audience who knew all about building coracles. Ancient audiences, it seems, were as intrigued–and as skeptical–about the ark as we are.

The book under review is:
Finkel, Irving. The Ark before Noah: Decoding the Story of the Flood. London, UK: Hodder & Stoughton, Ltd., 2014.