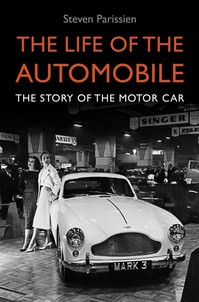 (p. C14) Mr. Parissien writes that Frenchman Nicolas Cugnot may well have built the first mechanical vehicle in 1769, a two-ton, steam-driven colossus that reportedly went out of control and crashed into a wall. It wasn’t until 1885 that Karl Benz, the acknowledged father of the automobile, debuted the first gasoline-powered motorcar, in Mannheim, Germany. It carried passengers just slightly quicker than they could walk.

With the arrival of that breakthrough, however, the race was on for who could come up with a sturdier, faster, more reliable motor car. Many of the innovators’ names are still familiar: Renault, Bentley and Daimler among them. Even piano makers Steinway & Sons tried their hand at building cars. Other companies appeared for a time and then vanished–Durant, Lanchester, Panhard and De Dion-Bouton–victims of bad guesses or bad timing. Much of Mr. Parissien’s story is devoted to the personalities, and eccentricities, of the men who created what for many years amounted to a plaything of the idle rich. Italian luxury builder Ettore Bugatti refused to sell one of his cars to King Zog of Albania because “the man’s table manners are beyond belief.”
It is the despotic Henry Ford who looms large in automotive history, not only for the introduction of his Model T but for his revolutionary system of shoveling raw materials in one end of his half-mile long Rouge River, Mich., factory complex and sending “Tin Lizzies” out the other end.

The book under review is:
Parissien, Steven. The Life of the Automobile: The Complete History of the Motor Car. New York: Thomas Dunne Books, 2014.