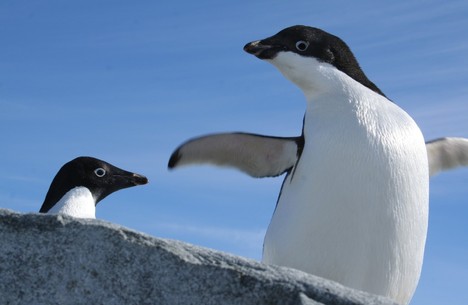 “Rather than declining as feared, the Adélie penguin population generally is on the rise, scientists say.” Source of caption and photo: online version of the WSJ article quoted and cited below.

(p. A3) For the first time, researchers have counted all the world’s Adélie penguins–a sprightly seabird considered a bellwether of climate change–and discovered that millions of them are thriving in and around Antarctica.
Rather than declining as feared due to warming temperatures that altered their habitats in some areas, the Adélie population generally is on the rise, the scientists said Thursday.
“What we found surprised everyone,” said ecologist Heather Lynch at Stony Brook University in Stony Brook, N.Y., who led the penguin census. “We found a 53% increase in abundance globally.”
Counting the birds by satellite, Dr. Lynch and imaging specialist Michelle LaRue at the University of Minnesota found that the Adélie penguin population now numbers 3.79 million breeding pairs–about 1.1 million more pairs than 20 years ago. In all, they identified 251 penguin colonies and surveyed 41 of them for the first time, including 17 apparently new colonies.

For the full story, see:
ROBERT LEE HOTZ. “Antarctic Penguins Thrive.” The Wall Street Journal (Fri., July 11, 2014): A3.
(Note: the online version of the story has the date July 10, 2014, and has the title “Adélie Penguin Census Shows Seabirds Are Thriving.”)