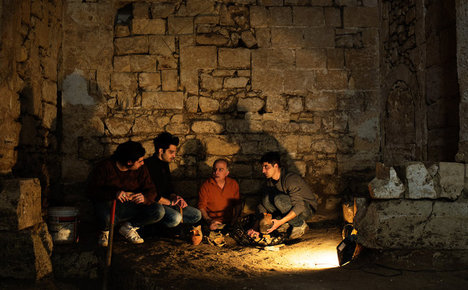 “Luciano Faggiano and his sons were digging to fix a pipe in Lecce, Italy. They found a buried world tracing back before Jesus.” Source of caption and photo: online version of the NYT article quoted and cited below.

(p. A1) LECCE, Italy — All Luciano Faggiano wanted when he purchased the seemingly unremarkable building at 56 Via Ascanio Grandi was to open a trattoria. The only problem was the toilet.

Sewage kept backing up. So Mr. Faggiano enlisted his two older sons to help him dig a trench and investigate. He predicted the job would take about a week.
If only.
“We found underground corridors and other rooms, so we kept digging,” said Mr. Faggiano, 60.
His search for a sewage pipe, which began in 2000, became one family’s tale of obsession and discovery. He found a subterranean world tracing back before the birth of Jesus: a Messapian tomb, a Roman granary, a Franciscan chapel and even etchings from the Knights Templar. His tratto-(p. A8)ria instead became a museum, where relics still turn up today.
. . .
If this history only later became clear, what was immediately obvious was that finding the pipe would be a much bigger project than Mr. Faggiano had anticipated. He did not initially tell his wife about the extent of the work, possibly because he was tying a rope around the chest of his youngest son, Davide, then 12, and lowering him to dig in small, darkened openings.
. . .
Mr. Faggiano still dreamed of a trattoria, even if the project had become his white whale. He supported his family with rent from an upstairs floor in the building and income on other properties.
“I was still digging to find my pipe,” he said. “Every day we would find new artifacts.”
. . .
Today, the building is Museum Faggiano, an independent archaeological museum authorized by the Lecce government. Spiral metal stairwells allow visitors to descend through the underground chambers, while sections of glass flooring underscore the building’s historical layers.
His docent, Rosa Anna Romano, is the widow of an amateur speleologist who helped discover the Grotto of Cervi, a cave on the coastline near Lecce that is decorated in Neolithic pictographs. While taking an outdoor bathroom break, the husband had noticed holes in the ground that led to the underground grotto.
“We were brought together by sewage systems,” Mr. Faggiano joked.
. . .
“I still want it,” he said of the trattoria. “I’m very stubborn.”