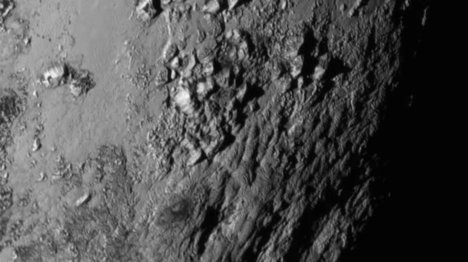 “New close-up images of a region near Pluto’s equator reveal a giant surprise: a range of youthful mountains.” Source of caption and photo: online version of the NYT article quoted and cited below.

(p. A1) LAUREL, Md. — The first close-up image of Pluto has revealed mountains as tall as the Rockies, and an absence of craters — discoveries that, to their delight, baffled scientists working on NASA’s New Horizons mission and provided punctuation for a journey nine and a half years in the making.

Only 112 years after the Wright Brothers were barely able to get their airplane off the ground, a machine from Earth has crossed the solar system to a small, icy world three billion miles away. The flyby on Tuesday, when New Horizons buzzed within 7,800 miles of the former ninth planet, came 50 years to the day after NASA’s Mariner 4 spacecraft made a similar first pass by Mars.