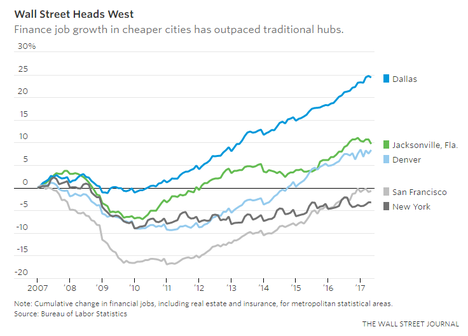 (p. B1) Traditional finance hubs have yet to recover all the jobs lost during the recession, but the industry is booming in places like Phoenix, Salt Lake City and Dallas. The migration has accelerated as investment firms face declining profitability and soaring real estate costs.
. . .
“San Francisco is a wonderful place, but unfortunately it’s an expensive place from a real estate standpoint,” said Brian McDonald, a senior vice president for Schwab. “So we had to identify other places where we could make things work.”
While the finance industry has been relocating entry-level jobs since the late 1980s, today’s moves are claiming higher-paid jobs in human resources, compliance and asset management, chipping away at New York City’s middle class, said (p. B2) Kathryn Wylde, president and chief executive of the Partnership for New York City, a nonprofit that represents the city’s business leadership.
“This industry isn’t just a bunch of rich Wall Street guys,” Ms. Wylde said. “It’s a big source of employment that’s disappearing from New York.”