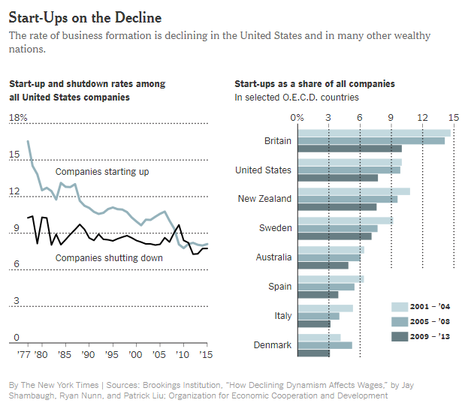 Source of graphs: online version of the NYT commentary quoted and cited below.

(p. B1) . . . a broad sweep of statistics reveals a peculiar weariness spreading through the economy. Belying breathless headlines about the fabulous opportunities that technology is about to bestow on society, it suggests that many rich market democracies have lost much of their dynamism. Their companies are getting old, and their labor markets are getting stuck. Productivity growth has slumped. And many workers in their prime are peeling off from the labor force.
. . .
(p. B4) . . . , the economy’s ability to generate and support new businesses — agents of creative destruction that bring new products and methods into the marketplace — appears to be faltering across the world. In the United States, the rate of company formation is half what it was four decades ago. And it is slowing in many industrialized countries.
. . .
In a study published on Tuesday [February 6, 2018] by the Hamilton Project at the Brookings Institution, Jay Shambaugh, Ryan Nunn and Patrick Liu explore what economists have figured out about the American economy’s inertia and the fallout for wages and living standards.
The evidence paints a distinct picture of decline: Fewer start-ups mean fewer new ideas and fewer young, productive businesses to replace older, less productive ones. Researchers have found that the decline in companies entering the market since 1980 has trimmed productivity growth by about 3.1 percent.
The dearth of new businesses is also cutting off one of the main paths to workers’ advancement: the outside job offer. Changing jobs allows workers to shift to positions in which they are more productive, and better paid. But labor market fluidity — job switching, creation and destruction — has been declining since the 1980s.
Clear though the pattern may be, the researchers acknowledge that we haven’t yet figured out what is holding the economy’s dynamism back. “This is one of those big, economywide trends,” Mr. Shambaugh told me. “There is room for a lot of stories.”

For the full commentary, see:
Porter, Eduardo. “ECONOMIC SCENE; What to Worry About: Decrease in Start-Ups Is a Sign of Stagnation.” The New York Times (Wednesday, February 7, 2018): B1 & B4.
(Note: ellipses, and bracketed date, added.)
(Note: the online version of the commentary has the date FEB. 6, 2018, and has the title “ECONOMIC SCENE; Where Are the Start-Ups? Loss of Dynamism Is Impeding Growth.”)

The paper by Shambaugh, Nunn, and Liu, that is mentioned above, is:
Shambaugh, Jay, Ryan Nunn, and Patrick Liu. “How Declining Dynamism Affects Wages.” In Revitalizing Wage Growth Policies to Get American Workers a Raise, edited by Jay Shambaugh and Ryan Nunn, Washington, D.C.: Brookings, 2018, pp. 11-23.