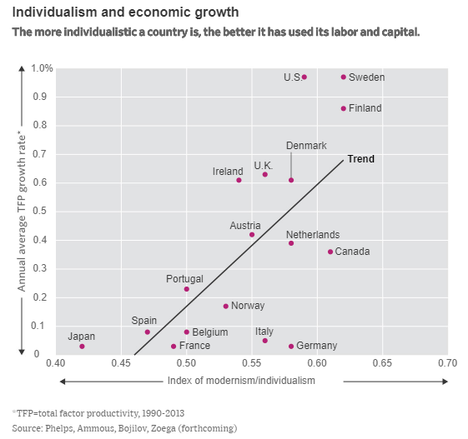 Source of graph: online version of the WSJ commentary quoted and cited below.

(p. B1) Luther matters to investors not because of the religion he founded, but because of the cultural impact of challenging the Catholic Church’s grip on society. By ushering in what Edmund Phelps, the Nobel-winning director of Columbia University’s Center on Capitalism and Society, calls the “the age of the individual,” Luther laid the groundwork for capitalism.
. . .
(p. B10) Mr. Phelps and collaborators Saifedean Ammous, Raicho Bojilov and Gylfi Zoega show that even in recent years, countries with more individualistic cultures have more innovative economies. They demonstrate a strong link between countries that surveys show to be more individualistic, and total factor productivity, a proxy for innovation that measures growth due to more efficient use of labor and capital. Less individualistic cultures, such as France, Spain and Japan, showed little innovation while the individualistic U.S. led.
As Mr. Bojilov points out, correlation doesn’t prove causation, so they looked at the effects of country of origin on the success of second, third and fourth-generation Americans as entrepreneurs. The effects turn out to be significant but leave room for debate about how important individualistic attitudes are to financial and economic success.

For the full commentary, see:
James Mackintosh. “STREETWISE; What Martin Luther Says About Capitalism.” The Wall Street Journal (Friday, Nov. 3, 2017): B1 & B10.
(Note: ellipsis added.)
(Note: the online version of the commentary has the date Nov. 2, 2017, and has the title “STREETWISE; What 500 Years of Protestantism Teaches Us About Capitalism’s Future.” Where there are minor differences in wording in the two versions, the passages quoted above follow the online version.)