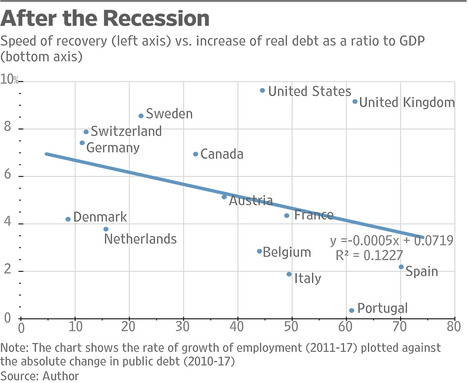 (p. A17) . . . is there evidence that stimulus was behind America’s recovery–or, for that matter, the recoveries in Germany, Switzerland, Sweden, Britain and Ireland? And is there evidence that the absence of stimulus–a tight rein on public spending known as “fiscal austerity”–is to blame for the lack of a full recovery in Portugal, Italy, France and Spain?
A simple test occurred to me: The stimulus story suggests that, in the years after they hit bottom, the countries that adopted relatively large fiscal deficits–measured by the average increase in public debt from 2011-17 as a percentage of gross domestic product–would have a relatively speedy recovery to show for it. Did they?
As the accompanying chart shows, the evidence does not support the stimulus story. Big deficits did not speed up recoveries. In fact, the relationship is negative, suggesting fiscal profligacy led to contraction and fiscal responsibility would have been better.

For the full commentary, see:
Phelps, Edmund. “The Fantasy of Fiscal Stimulus; It turns out Keynesian policies are correlated with slower, not faster, economic growth.” The Wall Street Journal (Tuesday, Oct. 30, 2018): A17.
(Note: ellipsis added.)
(Note: the online version of the commentary has the date Oct. 29, 2018.)