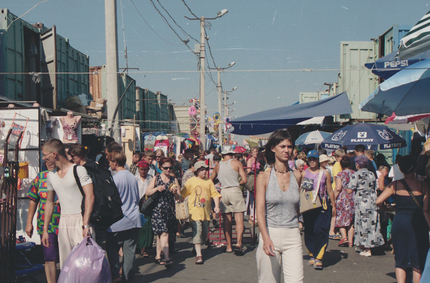 SEVENTH-KILOMETER MARKET, Ukraine, May 16 – Most of the shops here on the airport road outside Odessa are neither buildings nor stalls.  They are shipping containers, stacked two high in rows long enough to be called streets, though these are little more than overcrowded alleys.

From their steel gates spills a consumer abundance of inexpensive clothes, shoes and toys, kitchenware, hardware and software, cosmetics, sporting goods and various sundries — virtually everything, in short, in a part of the world that not long ago was used to getting by with virtually nothing.

”They were growing wheat here when I came,” said Aleksandr Sedov, who once programmed computers for the Soviet space program and now sells, mostly, suspenders and women’s blouses.  ”Now this place is called the field of wonders.”

It was also a dump and a garbage incinerator — paved over and torn down, respectively — when the last Soviet city fathers of Odessa expelled the pioneers in a previously unknown free market from the city, banishing them to a 10-acre spot seven kilometers, or about four miles, from the city’s limits, hence the name.  That was in 1989, as the Soviet Union itself was unraveling, and what has since emerged is Europe’s most extraordinary and, some say, largest market.