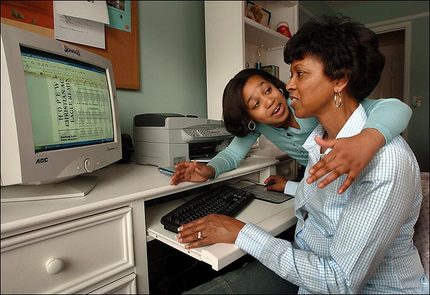 "Jazmyn Johnson, 9, recently helped her mother, Barbara, use their high-speed DSL Intenet connection at their home in Duluth, Ga."  Source of caption and photo:  online version of NYT article cited below.

(p. A1)  African-Americans are steadily gaining access to and ease with the Internet, signaling a remarkable closing of the "digital divide" that many experts had worried would be a crippling disadvantage in achieving success.

Civil rights leaders, educators and national policy makers warned for years that the Internet was bypassing blacks and some Hispanics as whites and Asian-Americans were rapidly increasing their use of it.

But the falling price of laptops, more computers in public schools and libraries and the newest generation of cellphones and hand-held devices that connect to the Internet have all contributed to closing the divide, Internet experts say.

Another powerful influence in attracting blacks and other minorities to the Internet has been the explosive evolution of the Internet itself, once mostly a tool used by researchers, which has become a cultural crossroad of work, play and social interaction.

"What digital divide?" Magic Johnson, the basketball legend, asked rhetorically in an interview about his new Internet campaign deal with the Ford Motor Company’s Lincoln Mercury division to use the Internet to promote cars to black prospective buyers.