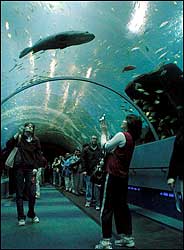 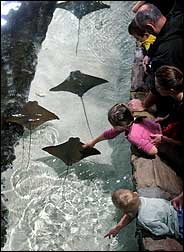 Scenes from the Georgia Aquarium.  Source of photos:  online version of the NYT article cited below.

(p. B1)  One of its sensations, . . ., is simply its ambition — look what we have gathered and constructed!  The Georgia Aquarium is billed as the world’s largest, and one can’t escape statistics of size and number: over 100,000 fish are displayed in five galleries and 60 habitats in the more than 500,000 square foot building; there is a 6.2 million gallon pool in which 1.8 million pounds of salt and minerals have been dissolved since last October and in which two whale sharks — the world’s largest fish — swim, displaying themselves to visitors through acrylic walls that are two feet thick.  A stainless steel "commissary" behind the scenes holds 20,000 pounds of frozen food at minus 20 degrees Fahrenheit.

This aquarium is also somewhat unusual in its origins: it is not created by a municipality, or a society of subscribers like those that founded the earliest public zoos.  It is almost completely the creation of a single man, Bernard Marcus, co-founder of the Home Depot, as a "gift" to the people of the city in which his company began.  He and his wife, Billi, donated $250 million of the $290 million cost.

(p. B7) The aquarium has been an overwhelming popular success. Even with admission prices of $22.75 for adults ($17 for children), demand has been so great that the building is often sold out.  Tickets come with timed entrances, and 290,000 annual passes, costing almost $60 for adults, were purchased before their sale was stopped in January.  A million visitors have come since the opening.