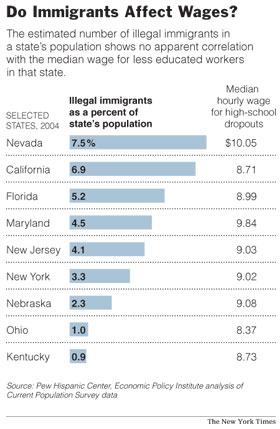 Source of graphic:  online version of the NYT article cited below.

As Congress debates an overhaul of the nation’s immigration laws, several economists and news media pundits have sounded the alarm, contending that illegal immigrants are causing harm to Americans in the competition for jobs.

Yet a more careful examination of the economic data suggests that the argument is, at the very least, overstated.  There is scant evidence that illegal immigrants have caused any significant damage to the wages of American workers.

The number that has been getting the most attention lately was produced by George J. Borjas and Lawrence F. Katz, two Harvard economists, in a paper published last year.  They estimated that the wave of illegal Mexican immigrants who arrived from 1980 to 2000 had reduced the wages of high school dropouts in the United States by 8.2 percent. But the economists acknowledge that the number does not consider other economic forces, such as the fact that certain businesses would not exist in the United States without cheap immigrant labor. If it had accounted for such things, immigration’s impact would be likely to look less than half as big.

. . . , as businesses and other economic agents have adjusted to immigration, they have made changes that have muted much of immigration’s impact on American workers.

For instance, the availability of foreign workers at low wages in the Nebraska poultry industry made companies realize that they had the personnel to expand.  So they invested in new equipment, generating jobs that would not otherwise be there.  In California’s strawberry patches, illegal immigrants are not competing against native workers; they are competing against pickers in Michoacán, Mexico.  If the immigrant pickers did not come north across the border, the strawberries would.

"Immigrants come in and the industries that use this type of labor grow," said David Card, an economist at the University of California, Berkeley.  "Taking all into account, the effects of immigration are much, much lower."

When Mr. Borjas and Mr. Katz assumed that businesses reacted to the extra workers with a corresponding increase in investment — as has happened in Nebraska — their estimate of the decline in wages of high school dropouts attributed to illegal immigrants was shaved to 4.8 percent. And they have since downgraded that number, acknowledging that the original analysis used some statistically flimsy data.

Assuming a jump in capital investment, they found that the surge in illegal immigration reduced the wages of high school dropouts by just 3.6 percent.