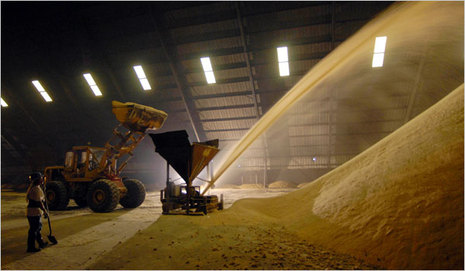 "Sugar being processed at the Louisiana Sugar Cooperative mill in St. Martinville, La."  Source of caption and photo:  online version of NYT article quoted and cited below.

(p. C1)  A little-noticed provision in the new farm bill working its way through Congress would oblige the Agriculture Department to buy surplus domestic sugar caused by the expected influx of Mexican sugar next year. Then the government would sell it, most likely at a steep discount, to ethanol producers to add to their fermentation tanks. The Bush administration is fighting the measure.

Sugar producers say the cost would be relatively low and the plan would help keep prices at a level they consider fair. As a side benefit, the deal would allow the nation to produce more ethanol to mix with gasoline, displacing some foreign oil, they say.

But ethanol producers are unenthused. And the plan is drawing fire from opponents of agricultural subsidies and from longtime critics of the sugar in- (p. C4) dustry, who complain that producers already have one of the best deals in American agriculture.

“It’s a tax burden without a benefit that distorts both the ethanol market and the food-ingredient market,” said Richard E. Pasco, counsel for the Sweetener Users Association, a lobby group for food companies that use sugar. “And guess who will pay the price? Taxpayers and consumers.”

The measure would be grafted onto an existing sugar policy so complex that even many farmers have trouble understanding it. The government limits the supply of sugar through production quotas and import restrictions, and it uses financial mechanisms to set an effective price floor.

The system does not cost taxpayers money directly, a point of pride for the industry. But it costs consumers money in the form of higher sugar prices. The system has been subjected to withering criticism for decades, but the sugar lobby has clout on Capitol Hill. Sugar producers donated $2.7 million in campaign contributions to House and Senate incumbents in 2006, more than any other group of food growers, according to the Center for Responsive Politics, a Washington group.

The new farm bill would retain much of the existing system, which sugar producers defend on the ground that virtually every country with a domestic sugar industry has strong protections. But it would add more guarantees, including one that would assure American producers 85 percent of the market no matter how much sugar comes in from abroad. 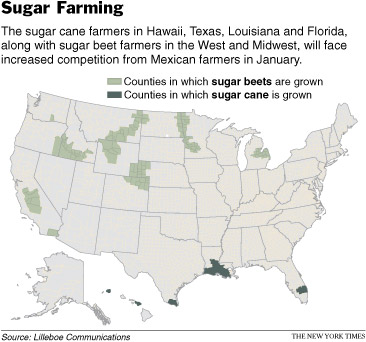 Source of graphic:  online version of NYT article cited above.

One thought on “New Farm Bill Is Sweet for Sugar Industry, but Sour for Sugar Consumers”